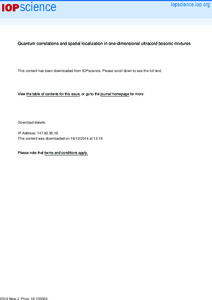 Polls, A.
Document typeArticle
Rights accessOpen Access
Abstract
We present the complete phase diagram for one-dimensional binary mixtures of bosonic ultracold atomic gases in a harmonic trap. We obtain exact results with direct numerical diagonalization for a small number of atoms, which permits us to quantify quantum many-body correlations. The quantum Monte Carlo method is used to calculate energies and density profiles for larger system sizes. We study the system properties for a wide range of interaction parameters. For the extreme values of these parameters, different correlation limits can be identified, where the correlations are either weak or strong. We investigate in detail how the correlations evolve between the limits. For balanced mixtures in the number of atoms in each species, the transition between the different limits involves sophisticated changes in the one-and two-body correlations. Particularly, we quantify the entanglement between the two components by means of the von Neumann entropy. We show that the limits equally exist when the number of atoms is increased for balanced mixtures. Also, the changes in the correlations along the transitions among these limits are qualitatively similar. We also show that, for imbalanced mixtures, the same limits with similar transitions exist. Finally, for strongly imbalanced systems, only two limits survive, i.e., a miscible limit and a phase-separated one, resembling those expected with a mean-field approach.
CitationGarcia, M. [et al.]. Quantum correlations and spatial localization in one-dimensional ultracold bosonic mixtures. "New journal of physics", 07 Octubre 2014, vol. 16, p. 1-18.
URIhttp://hdl.handle.net/2117/25053
DOI10.1088/1367-2630/16/10/103004
ISSN1367-2630
Publisher versionhttp://iopscience.iop.org/1367-2630/16/10/103004/
Collections
Share: