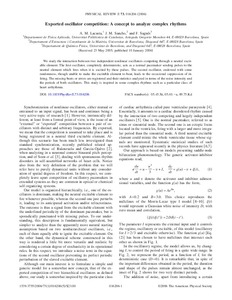 Sancho, Jose Maria
Sagués Mestre, Francesc
Document typeArticle
PublisherAmerican Physical Society
Rights accessOpen Access
Abstract
We study the interaction between two independent nonlinear oscillators competing through a neutral excitable element. The first oscillator, completely deterministic, acts as a normal pacemaker sending pulses to the neutral element which fires when it is excited by these pulses. The second oscillator, endowed with some randomness, though unable to make the excitable element to beat, leads to the occasional suppression of its firing. The missing beats or errors are registered and their statistics analyzed in terms of the noise intensity and the periods of both oscillators. This study is inspired in some complex rhythms such us a particular class of heart arrhythmia.
CitationLacasta, A.M; Sancho, J.M; Sagues, F. Exported oscillator competition: a concept to analyze complex rhythms. "PHYSICAL REVIEW E".2006, vol. 73, núm. 1, 1-5.
URIhttp://hdl.handle.net/2117/2502
DOI10.1103/PhysRevE.73.016206
ISSN1539-3755
Publisher versionhttp://link.aps.org/doi/10.1103/PhysRevE.73.016206
Collections
Share: