Nanoantenna enhanced emission of light-harvesting complex 2: the role of resonance, polarization, and radiative and non-radiative rates 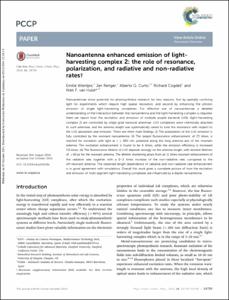 Show full item record
Wientjes, Emilie
Renger, Jan
Curto, Alberto
Cogdell, Richard
Hulst, Niek F. van
Document typeArticle
PublisherRoyal Society of Chemistry
Rights accessOpen Access
European Commission's projectNANOANTENNAS - Nano-Optical Antennas for Tuneable Single Photon Super-Emitters (EC-FP7-247330)
Abstract
Nanoantennae show potential for photosynthesis research for two reasons; first by spatially confining light for experiments which require high spatial resolution, and second by enhancing the photon emission of single light-harvesting complexes. For effective use of nanoantennae a detailed understanding of the interaction between the nanoantenna and the light-harvesting complex is required. Here we report how the excitation and emission of multiple purple bacterial LH2s (light-harvesting complex 2) are controlled by single gold nanorod antennae. LH2 complexes were chemically attached to such antennae, and the antenna length was systematically varied to tune the resonance with respect to the LH2 absorption and emission. There are three main findings. (i) The polarization of the LH2 emission is fully controlled by the resonant nanoantenna. (ii) The largest fluorescence enhancement, of 23 times, is reached for excitation with light at l = 850 nm, polarized along the long antenna-axis of the resonant antenna. The excitation enhancement is found to be 6 times, while the emission efficiency is increased 3.6 times. (iii) The fluorescence lifetime of LH2 depends strongly on the antenna length, with shortest lifetimes of B40 ps for the resonant antenna. The lifetime shortening arises from an 11 times resonant enhancement of the radiative rate, together with a 2–3 times increase of the non-radiative rate, compared to the off-resonant antenna. The observed length dependence of radiative and non-radiative rate enhancement is in good agreement with simulations. Overall this work gives a complete picture of how the excit
CitationWientjes, Emilie [et al.]. Nanoantenna enhanced emission of light-harvesting complex 2: the role of resonance, polarization, and radiative and non-radiative rates. "Physical Chemistry Chemical Physics", 3 Octubre 2014, vol. 16, p. 24739-24746.
URIhttp://hdl.handle.net/2117/24897
DOI10.1039/c4cp03636k
Publisher versionhttp://pubs.rsc.org/en/content/articlelanding/2014/cp/c4cp03636k#!divAbstract
Collections
Share: