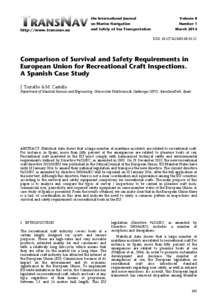 Except where otherwise noted, content on this work is licensed under a Creative Commons license : Attribution-NonCommercial-NoDerivs 3.0 Spain
Abstract
Statistical data shows that a large number of maritime accidents are related to recreational craft. For instance, in Spain, more than fifty percent of the emergencies are related to pleasure boats at sea. Recreational craft marketed in the EU must comply with harmonized technical safety and environmental requirements defined by Directive 94/25/EC, as amended in 2003. On 28 December 2013, the new recreational craft directive 2013/53/EU was published in the Official Journal of the European Union. EU Member States have until 18 January 2016 to amend their national legislation and transpose the new directive. The current directive 94/25/EC as amended by directive 2003/44/EC will be repealed on 18 January 2016, after the full application of the new text. Although this directive, there is not a clear coordination and equivalence among the EU countries according to the survival and safety equipment compulsory for recreational crafts. The main purpose of this paper is to analyze and compare the types of survey / inspections to be carried in pleasure craft (noncommercial use), periodicity and required safety equipment in some member states of the European Union. A case study of Spain is presented. From the results obtained, we can make clear that in the European Union there is a lack of coordination in this area and indicate the need to unify a common pattern in inspections and survival and safety requirements of recreational boats in the EU.
CitationTorralbo, J.; Castells, M. Comparison of Survival and Safety Requirements in European Union for Recreational Craft Inspections.A Spanish Case Study. "International Journal on Marine Navigation and Safety of Sea Transportation", 03 Març 2014, vol. 8, núm. 1, p. 103-111.
URIhttp://hdl.handle.net/2117/24860
DOI10.12716/1001.08.01.12
ISSN10.12716/1001.08.01.12
Publisher versionhttp://www.transnav.eu
Collections
Share: