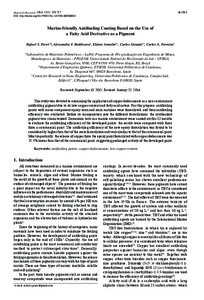 Ferreira, C. A.
Document typeArticle
Rights accessOpen Access
Abstract
This study was devoted to examining the application of copper dodecanoate as a non-contaminant antifouling pigment due to its low copper content and fatty acid nature. For this purpose, antifouling paints with mono-component epoxy resin and rosin matrixes were formulated, and their antifouling efficiency was evaluated. Before its incorporation into the different formulations, the synthesized pigment was characterized. Immersion tests in a marine environment were carried out for 12 months to evaluate the antifouling efficiency of the developed paints; the results were compared with those from a commercial paint. The antifouling efficiency of the new epoxy formulation was found to be considerably higher than that of the rosin formulation and very similar to that of the commercial paint. Most importantly, the release of copper from the epoxy paint formulated with copper dodecanoate was 73.5% lower than that of the commercial paint, suggesting prolonged activity of the developed paint.
CitationPeres, R. [et al.]. Marine-friendly antifouling coating based on the use of a fatty acid derivative as a pigment. "Materials research-Ibero-american journal of materials", Juny 2014, vol. 17, núm. 3, p. 720-727.
URIhttp://hdl.handle.net/2117/24850
DOI10.1590/S1516-14392014005000032
ISSN1516-1439
Publisher versionhttp://www.scielo.br/pdf/mr/v17n3/aop_matres_240213.pdf
Collections
Share: