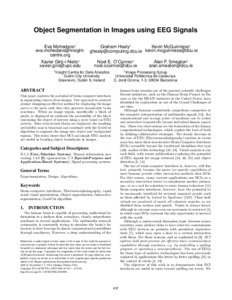 O'Connor, Noel
Smeaton, Alan F.
Document typeConference lecture
PublisherACM
Rights accessOpen Access
Abstract
This paper explores the potential of brain-computer interfaces in segmenting objects from images. Our approach is centered around designing an effective method for displaying the image parts to the users such that they generate measurable brain reactions. When an image region, specifically a block of pixels, is displayed we estimate the probability of the block containing the object of interest using a score based on EEG activity. After several such blocks are displayed, the resulting probability map is binarized and combined with the GrabCut algorithm to segment the image into object and background regions. This study shows that BCI and simple EEG analysis are useful in locating object boundaries in images.
CitationMohedano, E. [et al.]. Object segmentation in images using EEG signals. A: ACM Multimedia. "MM '14 Proceedings of the ACM International Conference on Multimedia". Orlando, Florida: ACM, 2014, p. 417-426.
URIhttp://hdl.handle.net/2117/24826
DOI10.1145/2647868.2654896
ISBN978-1-4503-3063-3
Publisher versionhttp://dl.acm.org/citation.cfm?doid=2647868.2654896
Collections
Share: