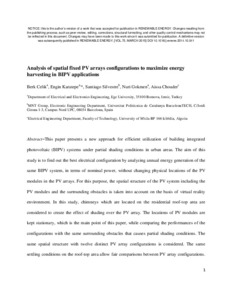 Gokmen, Nuri
Chouder, Aissa
Document typeArticle
Rights accessOpen Access
Abstract
This paper presents a new approach for efficient utilization of building integrated photovoltaic (BIPV) systems under partial shading conditions in urban areas. The aim of this study is to find out the best electrical configuration by analyzing annual energy generation of the same BIPV system, in terms of nominal power, without changing physical locations of the PV modules in the PV arrays. For this purpose, the spatial structure of the PV system including the PV modules and the surrounding obstacles is taken into account on the basis of virtual reality environment. In this study, chimneys which are located on the residential roof-top area are considered to create the effect of shading over the PV array. The locations of PV modules are kept stationary, which is the main point of this paper, while comparing the performances of the configurations with the same surrounding obstacles that causes partial shading conditions. The same spatial structure with twelve distinct PV array configurations is considered. The same settling conditions on the roof-top area allow fair comparisons between PV array configurations. The payback time analysis is also performed with considering local and global maximum power points (MPPs) of PV arrays by comparing the annual energy yield of the different configurations
CitationCelik, B. [et al.]. Analysis of spatial fixed PV arrays configurations to maximize energy harvesting in BIPV applications. "Renewable energy", 02 Març 2015, vol. 75, p. 534-540.
URIhttp://hdl.handle.net/2117/24798
DOI10.1016/j.renene.2014.10.041
ISSN0960-1481
Publisher versionhttp://www.sciencedirect.com/science/article/pii/S0960148114006685
Collections
Share: