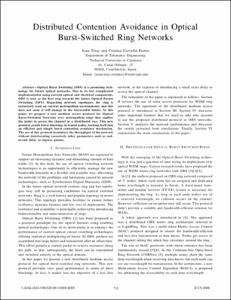 Document typeConference lecture
PublisherIEEE
Rights accessOpen Access
Abstract
Optical Burst Switching (OBS) is a promising technology for future optical networks. Due to its less complicated implementation using current optical and electrical components, OBS is seen as the first step towards the future Optical Packet Switching (OPS). Regarding network topologies, the ring is extensively used on current metropolitan environments, and this does not seem it will change in the foreseeable future. In this paper we propose a new medium access protocol for Optical Burst-Switched Networks over metropolitan rings that enables the nodes to access the channel in a distributed way. This new protocol avoids burst blockings in transit nodes, turning itself into an efficient and simple burst contention avoidance mechanism. The use of this protocol maximizes the throughput of the network without deteriorating excessively other parameters such as end-to- end delay or ingress queues.
CitationTriay, J.; Cervelló-Pastor, C. Distributed Contention Avoidance in Optical Burst-Switched Ring Networks. A: 11th IEEE International Conference on Communication Systems. IEEE, 2008, p. 715-720.
URIhttp://hdl.handle.net/2117/2471
ISBN978-1-4244-2424-5
Collections
Share: