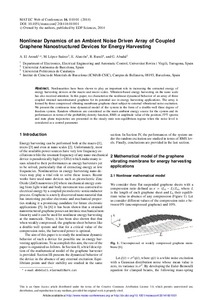 Nonlinearities have been shown to play an important role in increasing the extracted energy of energy harvesting devices at the macro and micro scales. Vibration-based energy harvesting on the nano scale has also received attention. In this paper, we characterize the nonlinear dynamical behavior of an array of three coupled strained nanostructured graphene for its potential use in energy harvesting applications. The array is formed by three compressed vibrating membrane graphene sheet subject to external vibrational noise excitation. We present the continuous time dynamical model of the system in the form of a double-well three degree of freedom system. Random vibrations are considered as the main ambient energy source for the system and its performances in terms of the probability density function, RMS or amplitude value of the position, FFT spectra and state plane trajectories are presented in the steady state non-equilibrium regime when the noise level is considered as a control parameter.
CitationEl Aroudi, A. [et al.]. Nonlinear dynamics of an ambient noise driven array of coupled graphene nanostructured devices for energy harvesting. A: International Conference on Structural Dynamics and Diagnosis. "MATEC Web of Conferences: volume 16, 2014: CSNDD 2014: International Conference on Structural Nonlinear Dynamics and Diagnosis". Agadir: EDP Sciences, 2014, p. 01001-1-01001-4.
URIhttp://hdl.handle.net/2117/24699
DOI10.1051/matecconf/20141601001
ISBN2261-236X
Publisher versionhttp://www.matec-conferences.org/articles/matecconf/abs/2014/07/matecconf_csndd2014_01001/matecconf_csndd2014_01001.html