Stereo-Acuity in Patients Implanted with Multifocal Intraocular Lenses: Is the Choice of Stereotest Relevant? 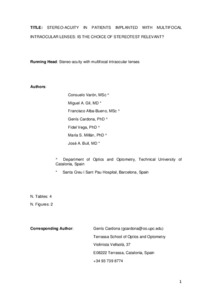 Buil Calvo, José Antonio
Document typeArticle
Rights accessOpen Access
Abstract
Purpose: A randomized and double-blinded study design was implemented to assess the stereo-acuity in patients symmetrically implanted with four types of multifocal intraocular lenses (MIOLs), compared to a monofocal lens (control group). In addition, the influence of the type of test employed for the evaluation of stereo-acuity was explored.; Materials and Methods: Six months after cataract intervention, stereo-acuity was measured with the Titmus and TNO stereotests in 143 patients implanted with one of the following MIOL lens types: hybrid spherical SN60D3, hybrid aspheric SN6AD1, diffractive aspheric ZMA00 and refractive spherical NXG1. A control group implanted with the monofocal aspheric ZA9003 (in which stereo-acuity was measured with a near addition) was also included in the study.; Results: Statistically significant better stereo-acuity was found in the monofocal group with both stereotests (except for the SN60D3 group with the Titmus test) (all p<0.001). No significant differences in stereo-acuity between MIOLs were found using the Titmus test. However, with the TNO, patients implanted with hybrid diffractive MIOLs exhibited statistically significant worse stereo-acuity than those with the refractive design (SN60D3, p<0.001; SN6AD1, p = 0.006).; Conclusions: Patients implanted with MIOLs have worse stereo-acuity than those implanted with monofocal IOLs due to the decrease in retinal image contrast originating in the simultaneous presence of two images. Awavelength-based stereotest such as the TNO induces large differences in image contrast between fellow eyes implanted with diffractive-based MIOLs, which may result in an underestimation of the real stereo-acuity of the patient.
CitationVaron, M. [et al.]. Stereo-Acuity in Patients Implanted with Multifocal Intraocular Lenses: Is the Choice of Stereotest Relevant?. "Current eye research", 01 Juliol 2014, vol. 39, núm. 7, p. 711-719.
URIhttp://hdl.handle.net/2117/24616
DOI10.3109/02713683.2013.865758
ISSN0271-3683
Publisher versionhttp://informahealthcare.com/doi/abs/10.3109/02713683.2013.865758
Collections
Share: