Discussion on Muskingum versus Integrator-delay models for control objectives 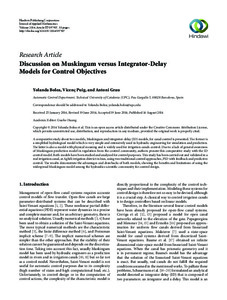 A comparative study about two models, Muskingum and integrator-delay (ID) models, for canal control is presented. The former is a simplified hydrological model which is very simple and extensively used in hydraulic engineering for simulation and prediction. The latter is also a model with physical meaning and is widely used for irrigation canals control. Due to a lack of general awareness of Muskingum prediction model in regulation from the control community, authors present this comparative study with the ID control model. Both models have been studied and analyzed for control purposes. This study has been carried out and validated in a real irrigation canal, at Aghili irrigation district in Iran, using two traditional control approaches, PID with feedback and predictive control. The results demonstrate the advantages and drawbacks of both models, showing the benefits and limitations of using the widespread Muskingum model among the hydraulics scientific community for control design.
CitationBolea, Y.; Puig, V.; Grau, A. Discussion on Muskingum versus Integrator-delay models for control objectives. "Journal of applied mathematics", 14 Agost 2014, vol. 2014 (2014), núm. Article ID 197907, p. 1-11.
URIhttp://hdl.handle.net/2117/24565
DOI10.1155/2014/197907
ISSN1110-757X
Publisher versionhttp://www.hindawi.com/journals/jam/2014/197907/