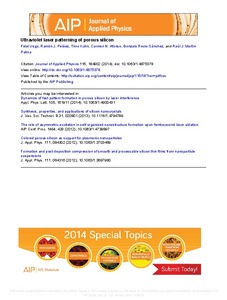 Pelaez de Fuentes, Ramon Javier
Khun, Timo
Afonso Rodriguez, Carmen Nieves
Recio Sanchez, Gonzalo
Martin Palma, Raul Jose
Document typeArticle
PublisherAmerican Institute of Physics (AIP)
Rights accessOpen Access
Abstract
This work reports on the fabrication of 1D fringed patterns on nanostructured porous silicon (nanoPS) layers (563, 372, and 290nm thick). The patterns are fabricated by phase-mask laser interference using single pulses of an UV excimer laser (193nm, 20ns pulse duration). The method is a single-step and flexible approach to produce a large variety of patterns formed by alternate regions of almost untransformed nanoPS and regions where its surface has melted and transformed into Si nanoparticles (NPs). The role of laser fluence (5-80mJcm-2), and pattern period (6.3-16µm) on pattern features and surface structuring are discussed. The results show that the diameter of Si NPs increases with fluence up to a saturation value of 75nm for a fluence ˜40mJcm-2. In addition, the percentage of transformed to non-transformed region normalized to the pattern period follows similar fluence dependence regardless the period and thus becomes an excellent control parameter. This dependence is fitted within a thermal model that allows for predicting the in-depth profile of the pattern. The model assumes that transformation occurs whenever the laser-induced temperature increase reaches the melting temperature of nanoPS that has been found to be 0.7 of that of crystalline silicon for a porosity of around 79%. The role of thermal gradients across the pattern is discussed in the light of the experimental results and the calculated temperature profiles, and shows that the contribution of lateral thermal flow to melting is not significant for pattern periods =6.3µm.
CitationVega, F. [et al.]. Ultraviolet laser patterning of porous silicon. "Journal of applied physics", 14 Maig 2014, vol. 115, núm. 18, p. 184902-1-184902-8.
URIhttp://hdl.handle.net/2117/24544
DOI10.1063/1.4875378
ISSN0021-8979
Publisher versionhttp://scitation.aip.org/content/aip/journal/jap/115/18/10.1063/1.4875378
Collections
Share: