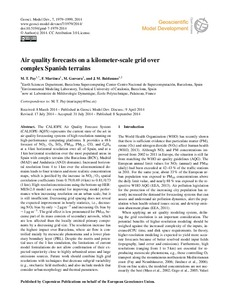 The CALIOPE Air Quality Forecast System (CALIOPE-AQFS) represents the current state of the art in air quality forecasting systems of high-resolution running on high-performance computing platforms. It provides a 48 h forecast of NO2, O3, SO2, PM10, PM2.5, CO, and C6H6at a 4 km horizontal resolution over all of Spain, and at a 1 km horizontal resolution over the most populated areas in Spain with complex terrains (the Barcelona (BCN), Madrid (MAD) and Andalusia (AND) domains). Increased horizontal resolution from 4 to 1 km over the aforementioned domains leads to finer textures and more realistic concentration maps, which is justified by the increase in NO2/O3spatial correlation coefficients from 0.79/0.69 (4 km) to 0.81/0.73 (1 km). High-resolution emissions using the bottom-up HERMESv2.0 model are essential for improving model performance when increasing resolution on an urban scale, but it is still insufficient. Decreasing grid spacing does not reveal the expected improvement in hourly statistics, i.e., decreasing NO2bias by only ~ 2 µg m-3and increasing O3 bias by ~ 1 µg m-3. The grid effect is less pronounced for PM10, because part of its mass consists of secondary aerosols, which are less affected than the locally emitted primary components by a decreasing grid size. The resolution increase has the highest impact over Barcelona, where air flow is controlled mainly by mesoscale phenomena and a lower planetary boundary layer (PBL). Despite the merits and potential uses of the 1-km simulation, the limitations of current model formulations do not allow confirmation of their expected superiority close to highly urbanized areas and large emissions sources. Future work should combine high grid resolutions with techniques that decrease subgrid variability (e.g., stochastic field methods), and also include models that consider urban morphology and thermal parameters.
CitationPay, M.T. [et al.]. Air quality forecasts on a kilometer-scale grid over complex Spanish terrains. "Geoscientific model development", 08 Setembre 2014, vol. 7, núm. 5, p. 1979-1999.
URIhttp://hdl.handle.net/2117/24521
DOI10.5194/gmd-7-1979-2014
ISSN1991-959X