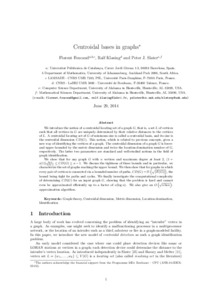 Show full item record
Foucaud, Florent
Klasing, Ralf
Slater, Peter J
Document typeArticle
Rights accessOpen Access
Abstract
We introduce the notion of a centroidal locating set of a graph G, that is, a set L of vertices such that all vertices in G are uniquely determined by their relative distances to the vertices of L. A centroidal locating set of G of minimum size is called a centroidal basis, and its size is the centroidal dimension CD (G). This notion, which is related to previous concepts, gives a new way of identifying the vertices of a graph. The centroidal dimension of a graph G is lower- and upper-bounded by the metric dimension and twice the location-domination number of G, respectively. The latter two parameters are standard and well-studied notions in the field of graph identification. We show that for any graph G with n vertices and maximum degree at least 2, (1 + o(1)) In n/InInn <= CD <= (G) n - 1. We discuss the tightness of these bounds and in particular, we characterize the set of graphs reaching the upper bound. We then show that for graphs in which every pair of vertices is connected via a bounded number of paths, CD(G) = Omega(root vertical bar E(G)vertical bar) , the bound being tight for paths and cycles. We finally investigate the computational complexity of determining CD(G) for an input graph G, showing that the problem is hard and cannot even be approximated efficiently up to a factor of o(log n). We also give an O (root nInn)-approximation algorithm.
CitationFoucaud, F.; Klasing, R.; Slater, P. Centroidal bases in graphs. "Networks", 01 Setembre 2014, vol. 64, núm. 2, p. 96-108.
URIhttp://hdl.handle.net/2117/24395
DOI10.1002/net.21560
ISSN0028-3045
Publisher versionhttp://onlinelibrary.wiley.com/doi/10.1002/net.21560/pdf
Collections
Share: