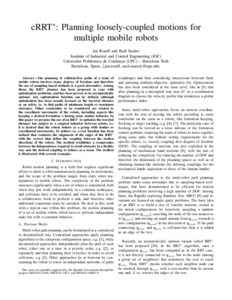 The planning of collision-free paths of a team of mobile robots involves many degrees of freedom and therefore the use of sampling-based methods is a good alternative. Among them, the RRT planner has been proposed to cope with optimization problems, and has been proven to be asymptotically optimal. Any optimization function can be defined, although optimization has been usually focused on the traveled distance or on safety, i.e. to find paths of minimum length or maximum clearance. Other constraints to be considered are related to the coordinate movements of the robots, including aspects like keeping a desired formation o having some similar behavior. In this paper we propose the use of an RRT to optimize the traveled distance but subject to a coupled behavior between robots, i.e. it is desired that the robots behave as a group with similar or coordinated movements. To achieve so, a cost function has been defined that evaluates the alignment of the edges of the RRT with the vectors that define the coupling between the motion directions of the robots. The method establishes a compromise between the independence required to avoid obstacles in a flexible way and the desired coupling to behave as a team. The method is illustrated with several examples.
CitationRosell, J.; Suarez, R. cRRT*: Planning loosely-coupled motions for multiple mobile robots. A: ETFA - IEEE International Conference on Emerging Technologies and Factory Automation. "Proceedings of the 19th IEEE International Conference on Emerging Technologies and Factory Automation". Barcelona: Institute of Electrical and Electronics Engineers (IEEE), 2014.
URIhttp://hdl.handle.net/2117/24362
ISBN978-1-4799-4846-8