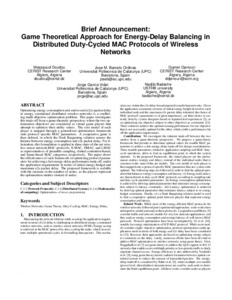 Optimizing energy consumption and end-to-end (e2e) packet delay in energy constrained distributed wireless networks is a conflicting multi-objective optimization problem. This paper investigates this trade-off from a game-theoretic perspective, where the two optimization objectives are considered as virtual game players that attempt to optimize their utility values. The cost model of each player is mapped through a generalized optimization framework onto protocol specific MAC parameters. A cooperative game is then defined, in which the Nash Bargaining solution assures the balance between energy consumption and e2e packet delay. For illustration, this formulation is applied to three state-of-the-art wireless sensor network MAC protocols; X-MAC, DMAC, and LMAC as representatives of preamble sampling, slotted contention-based, and frame-based MAC categories, respectively. The paper shows the effectiveness of such framework in optimizing protocol parameters for achieving a fair energy-delay performance trade-off, under the application requirements in terms of initial energy budget and maximum e2e packet delay. The proposed framework is scalable with the increase in the number of nodes, as the players represent the optimization metrics instead of nodes.
CitationDoudou, M. [et al.]. Brief announcement: Game theoretical approach for energy-delay balancing in distributed duty-cycled MAC protocols of wireless networks. A: ACM Symposium on Principles of Distributed Computing. "PODC '14: proceedings of the 2014 ACM symposium on Principles of distributed computing". Paris: Association for Computing Machinery (ACM), 2014, p. 147-149.
URIhttp://hdl.handle.net/2117/24355
DOI10.1145/2611462.2611509
ISBN978-1-4503-2944-6