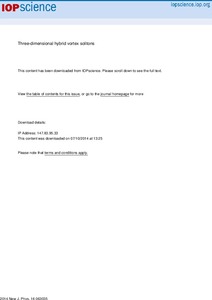 We show, by means of numerical and analytical methods, that media with a repulsive nonlinearity which grows from the center to the periphery support a remarkable variety of previously unknown complex stationary and dynamical three-dimensional (3D) solitary-wave states. Peanut-shaped modulation profiles give rise to vertically symmetric and antisymmetric vortex states, and novel stationary hybrid states, built of top and bottom vortices with opposite topological charges, as well as robust dynamical hybrids, which feature stable precession of a vortex on top of a zero-vorticity soliton. The analysis reveals stability regions for symmetric, antisymmetric, and hybrid states. In addition, bead-shaped modulation profiles give rise to the first example of exact analytical solutions for stable 3D vortex solitons. The predicted states may be realized in media with a controllable cubic nonlinearity, such as Bose-Einstein condensates.
CitationDriben, R. [et al.]. Three-dimensional hybrid vortex solitons. "New journal of physics", 16 Juny 2014, vol. 16.
URIhttp://hdl.handle.net/2117/24296
DOI10.1088/1367-2630/16/6/063035
ISSN1367-2630
Publisher versionhttp://iopscience.iop.org/1367-2630/16/6/063035/pdf/1367-2630_16_6_063035.pdf