Quantum Google in a complex network 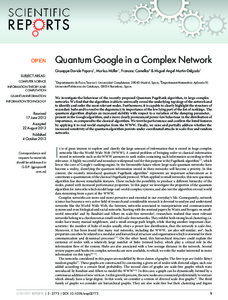 Martin Delgado, Miguel Angel
Document typeArticle
PublisherMACMILLAN PUBLISHERS LIMITED
Rights accessOpen Access
European Commission's projectPICC - The physics of Ion Coulomb Crystals: Thermodynamics, Quantum control, and Quantum Simulators. (EC-FP7-249958)
Abstract
We investigate the behaviour of the recently proposed Quantum PageRank algorithm, in large complex networks. We find that the algorithm is able to univocally reveal the underlying topology of the network and to identify and order the most relevant nodes. Furthermore, it is capable to clearly highlight the structure of secondary hubs and to resolve the degeneracy in importance of the low lying part of the list of rankings. The quantum algorithm displays an increased stability with respect to a variation of the damping parameter, present in the Google algorithm, and a more clearly pronounced power-law behaviour in the distribution of importance, as compared to the classical algorithm. We test the performance and confirm the listed features by applying it to real world examples from the WWW. Finally, we raise and partially address whether the increased sensitivity of the quantum algorithm persists under coordinated attacks in scale-free and random networks.
CitationPaparo, G.D [et al.]. Quantum Google in a complex network. "Scientific reports", 04 Octubre 2013, vol. 3, p. 2773-1-2773-16.
URIhttp://hdl.handle.net/2117/24220
DOI10.1038/srep02773
ISSN2045-2322
Publisher versionhttp://www.nature.com/srep/2013/131004/srep02773/full/srep02773.html
Collections
Share: