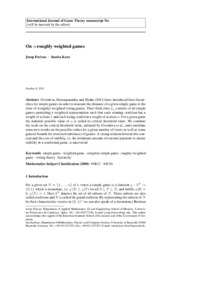 Kurz, Sascha
Document typeArticle
Rights accessOpen Access
Abstract
Gvozdeva, Hemaspaandra, and Slinko (2011) have introduced three hierarchies for simple games in order to measure the distance of a given simple game to the class of (roughly) weighted voting games. Their third class C-alpha consists of all simple games permitting a weighted representation such that each winning coalition has a weight of at least and each losing coalition a weight of at most alpha. For a given game the minimal possible value of alpha is called its critical threshold value. We continue the work on the critical threshold value, initiated by Gvozdeva et al., and contribute some new results on the possible values for a given number of voters as well as some general bounds for restricted subclasses of games. A strong relation between this concept and the cost of stability, i.e. the minimum amount of external payment to ensure stability in a coalitional game, is uncovered.
CitationFreixas, J.; Kurz, S. On a-roughly weighted games. "International journal of game theory". Agost 2014, vol. 43, núm. 3, p. 659-692.
URIhttp://hdl.handle.net/2117/24210
DOI10.1007/s00182-013-0402-x
ISSN0020-7276
Collections
Share: