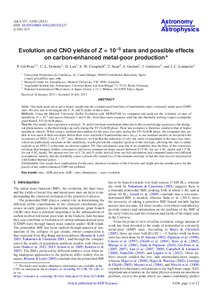 Lattanzio, John C.
Document typeArticle
Rights accessOpen Access
Abstract
Aims. Our main goals are to get a deeper insight into the evolution and final fates of intermediate-mass, extremely metal-poor (EMP) stars. We also aim to investigate the C, N, and O yields of these stars. Methods. Using the Monash University Stellar Evolution code MONSTAR we computed and analysed the evolution of stars of metallicity Z = 10-5 and masses between 4 and 9 M¿, from their main sequence until the late thermally pulsing (super) asymptotic giant branch, TP-(S)AGB phase. Results. Our model stars experience a strong C, N, and O envelope enrichment either due to the second dredge-up process, the dredge-out phenomenon, or the third dredge-up early during the TP-(S)AGB phase. Their late evolution is therefore similar to that of higher metallicity objects. When using a standard prescription for the mass loss rates during the TP-(S)AGB phase, the computed stars are able to lose most of their envelopes before their cores reach the Chandrasekhar mass (mCh), so our standard models do not predict the occurrence of SNI1/2 for Z = 10-5 stars. However, we find that the reduction of only one order of magnitude in the mass-loss rates, which are particularly uncertain at this metallicity, would prevent the complete ejection of the envelope, allowing the stars to either explode as an SNI1/2 or become an electron-capture SN. Our calculations stop due to an instability near the base of the convective envelope that hampers further convergence and leaves remnant envelope masses between 0.25 M¿ for our 4 M¿ model and 1.5 M¿ for our 9 M¿ model. We present two sets of C, N, and O yields derived from our full calculations and computed under two different assumptions, namely, that the instability causes a practically instant loss of the remnant envelope or that the stars recover and proceed with further thermal pulses. Conclusions. Our results have implications for the early chemical evolution of the Universe and might provide another piece for the puzzle of the carbon-enhanced EMP star problem.
CitationGil Pons, P. [et al.]. Evolution and CNO yields of Z = 10-5 stars and possible effects on carbon-enhanced metal-poor production. "Astronomy and astrophysics", Setembre 2013, vol. 557, p. 106-118Evolution and CNO yields of Z = 10-5 stars and possible effects on carbon-enhanced metal-poor production.
URIhttp://hdl.handle.net/2117/24107
DOI10.1051/0004-6361/201321127
ISSN0004-6361
Collections
Share: