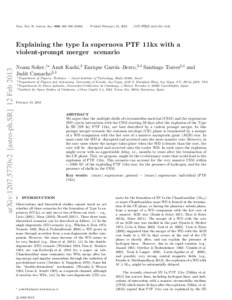 Soker, Noam
Kashi, Amit
Document typeArticle
Rights accessOpen Access
All rights reserved. This work is protected by the corresponding intellectual and industrial property rights. Without prejudice to any existing legal exemptions, reproduction, distribution, public communication or transformation of this work are prohibited without permission of the copyright holder
Abstract
We argue that the multiple shells of circumstellar material (CSM) and the supernovae (SNe) ejecta interaction with the CSM starting 59 d after the explosion of the Type Ia SN PTF 11kx are best described by a violent prompt merger. In this prompt merger scenario, the common envelope (CE) phase is terminated by a merger of a white dwarf (WD) companion with the hot core of a massive asymptotic giant branch star. In most cases, the WD is disrupted and accreted on to the more massive core. However, in the rare cases, where the merger takes place when the WD is denser than the core, the core will be disrupted and accreted on to the cooler WD. In such cases, the explosion might occur with no appreciable delay, i.e. months to years after the termination of the CE phase. This, we propose, might be the evolutionary route that could lead to the explosion of PTF 11kx. This scenario can account for the very massive CSM within similar to 1000 au of the exploding PTF 11kx star, for the presence of hydrogen, and for the presence of shells in the CSM.
CitationGarcia-berro, E. [et al.]. Explaining the Type Ia supernova PTF 11kx with a violent prompt merger scenario. "Monthly notices of the Royal Astronomical Society", Maig 2013, vol. 431, núm. 2, p. 1541-1546.
URIhttp://hdl.handle.net/2117/24103
DOI10.1093/mnras/stt271
ISSN0035-8711
Collections
Share: