On the modeling and real-time control of urban drainage systems: A survey 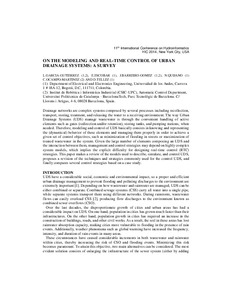 Téllez, Duván
Document typeConference report
Rights accessOpen Access
European Commission's projectEFFINET - Efficient Integrated Real-time Monitoring and Control of Drinking Water Networks (EC-FP7-318556)
Abstract
Drainage networks are complex systems composed by several processes including recollection, transport, storing, treatment, and releasing the water to a receiving environment. The way Urban Drainage Systems (UDS) manage wastewater is through the convenient handling of active elements such as gates (redirection and/or retention), storing tanks, and pumping stations, when needed. Therefore, modeling and control of UDS basically consists in knowing and representing the (dynamical) behavior of these elements and managing them properly in order to achieve a given set of control objectives, such as minimization of flooding in streets or maximization of treated wastewater in the system. Given the large number of elements composing an UDS and the interaction between them, management and control strategies may depend on highly complex system models, which implies the explicit difficulty for designing real-time control (RTC) strategies. This paper makes a review of the models used to describe, simulate, and control UDS, proposes a revision of the techniques and strategies commonly used for the control UDS, and finally compares several control strategies based on a case study.
CitationGarcía, L. [et al.]. On the modeling and real-time control of urban drainage systems: A survey. A: International Conference on Hydroinformatics. "11th International Conference on Hydroinformatics". New York: 2014, p. 1-8.
URIhttp://hdl.handle.net/2117/24059
Publisher versionhttps://www.conftool.pro/hic2014/index.php/HIC2014-1446.pdf?page=downloadPaper&filename=HIC2014-1446.pdf&form_id=1446&form_version=final
Collections
Share: