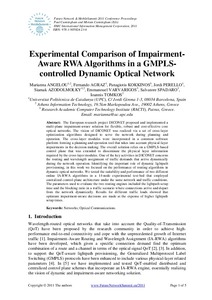 Tomkos, Ioannis
Document typeConference report
Rights accessOpen Access
Abstract
The European research project DICONET proposed and implemented a multi-plane impairment-aware solution for flexible, robust and cost-effective core optical networks. The vision of DICONET was realized via a set of cross-layer optimization algorithms designed to serve the network during planning and operation. The cross-layer modules were incorporated in a common software platform forming a planning and operation tool that takes into account physical-layer impairments in the decision making. The overall solution relies on a GMPLS-based control plane that was extended to disseminate the physical layer information required by the cross-layer modules. One of the key activities in DICONET concerns the routing and wavelength assignment of traffic demands that arrive dynamically during the network operation. Identifying the important role of dynamic lightpath provisioning, in this work we focused on the performance of routing algorithms in dynamic optical networks. We tested the suitability and performance of two different online IA-RWA algorithms in a 14-node experimental test-bed that employed centralized control-plane architecture under the same network and traffic conditions. The parameters used to evaluate the two routing engines included the lightpath setup time and the blocking ratio in a traffic scenario where connections arrive and depart from the network dynamically. Results for different traffic loads showed that optimum impairment-aware decisions are made at the expense of higher lightpath setup times.
CitationAngelou, M. [et al.]. Experimental comparison of impairment-aware RWA algorithms in a GMPLS-controlled dynamic optical network. A: Future Network and MobileSummit. "Future Network & MobileSummit 2011 Conference Proceedings". Warsaw: 2011, p. 1-5.
URIhttp://hdl.handle.net/2117/24029
ISBN978-1-905824-23-6
Publisher versionhttp://ieeexplore.ieee.org/xpls/abs_all.jsp?arnumber=6095250&tag=1
Collections
Share: