Fenton coupled with nanofiltration for elimination of Bisphenol A 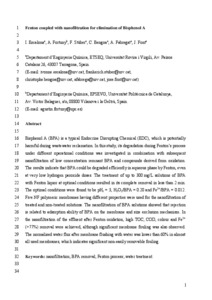 Font Capafons, Josep
Document typeArticle
Rights accessOpen Access
All rights reserved. This work is protected by the corresponding intellectual and industrial property rights. Without prejudice to any existing legal exemptions, reproduction, distribution, public communication or transformation of this work are prohibited without permission of the copyright holder
Abstract
Bisphenol A (BPA) is a typical Endocrine Disrupting Chemical (EDC), which is potentially harmful during wastewater reclamation. In this study, its degradation during Fenton's process under different operational conditions was investigated in combination with subsequent nanofiltration of low concentration remnant BPA and compounds derived from oxidation. The results indicate that BPA could be degraded efficiently in aqueous phase by Fenton, even at very low hydrogen peroxide doses. The treatment of up to 300 mg/L solutions of BPA with Fenton liquor at optimal conditions resulted in its complete removal in less than 2 min. The optimal conditions were found to be pH, = 3, H2O2/BPA = 020 and Fe2+/BPA = 0.012. Five NF polymeric membranes having different properties were used for the nanofiltration of treated and non-treated solutions. The nanofiltration of BPA solutions showed that rejection is related to adsorption ability of BPA on the membrane and size exclusion mechanism. In the nanofiltration of the effluent after Fenton oxidation, high TOC, COD, colour and Fe2+ (>77%) removal were achieved, although significant membrane fouling was also observed. The normalised water flux after membrane flushing with water was lower than 60% in almost all used membranes, which indicates significant non-easily removable fouling. (C) 2014 Elsevier B.V. All rights reserved.
CitationEscalona, I. [et al.]. Fenton coupled with nanofiltration for elimination of Bisphenol A. "Desalination", 15 Juliol 2014, vol. 345, p. 77-84.
URIhttp://hdl.handle.net/2117/23982
DOI10.1016/j.desal.2014.04.024
ISSN0011-9164
Publisher versionhttp://www.sciencedirect.com/science/article/pii/S0011916414002392
Collections
Share: