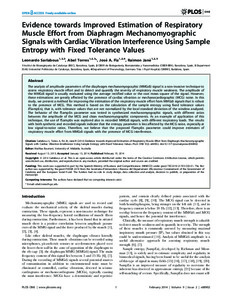 The analysis of amplitude parameters of the diaphragm mechanomyographic (MMGdi) signal is a non-invasive technique to assess respiratory muscle effort and to detect and quantify the severity of respiratory muscle weakness. The amplitude of the MMGdi signal is usually evaluated using the average rectified value or the root mean square of the signal. However, these estimations are greatly affected by the presence of cardiac vibration or mechanocardiographic (MCG) noise. In this study, we present a method for improving the estimation of the respiratory muscle effort from MMGdi signals that is robust to the presence of MCG. This method is based on the calculation of the sample entropy using fixed tolerance values (fSampEn), that is, with tolerance values that are not normalized by the local standard deviation of the window analyzed. The behavior of the fSampEn parameter was tested in synthesized mechanomyographic signals, with different ratios between the amplitude of the MCG and clean mechanomyographic components. As an example of application of this technique, the use of fSampEn was explored also in recorded MMGdi signals, with different inspiratory loads. The results with both synthetic and recorded signals indicate that the entropy parameter is less affected by the MCG noise, especially at low signal-to-noise ratios. Therefore, we believe that the proposed fSampEn parameter could improve estimates of respiratory muscle effort from MMGdi signals with the presence of MCG interference.
CitationSarlabous, L. [et al.]. Evidence towards improved estimation of respiratory muscle effort from diaphragm mechanomyographic signals with cardiac vibration interference using sample entropy with fixed tolerance values. "PLoS one", 19 Febrer 2014, vol. 9, núm. 2, p. e88902-1-e88902-10.
URIhttp://hdl.handle.net/2117/23702
DOI10.1371/journal.pone.0088902
ISSN1932-6203
Publisher versionhttp://www.plosone.org/article/info%3Adoi%2F10.1371%2Fjournal.pone.0088902