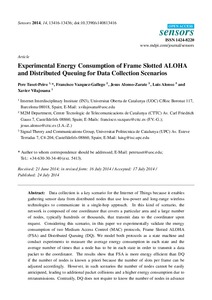 Vilajosana, Xavier
Document typeArticle
Rights accessOpen Access
European Commission's projectRELYONIT - Research by Experimentation for Dependability on the Internet of Things (EC-FP7-317826)
SWAP - Symbiotic Wireless Autonomous Powered system (EC-FP7-251557)
CALIPSO - CALIPSO: Connect All IP-based Smart Objects! (EC-FP7-288879)
NEWCOM# - Network of Excellence in Wireless COMmunications # (EC-FP7-318306)
Abstract
Data collection is a key scenario for the Internet of Things because it enables gathering sensor data from distributed nodes that use low-power and long-range wireless technologies to communicate in a single-hop approach. In this kind of scenario, the network is composed of one coordinator that covers a particular area and a large number of nodes, typically hundreds or thousands, that transmit data to the coordinator upon request. Considering this scenario, in this paper we experimentally validate the energy consumption of two Medium Access Control (MAC) protocols, Frame Slotted ALOHA (FSA) and Distributed Queuing (DQ). We model both protocols as a state machine and conduct experiments to measure the average energy consumption in each state and the average number of times that a node has to be in each state in order to transmit a data packet to the coordinator. The results show that FSA is more energy efficient than DQ if the number of nodes is known a priori because the number of slots per frame can be adjusted accordingly. However, in such scenarios the number of nodes cannot be easily anticipated, leading to additional packet collisions and a higher energy consumption due to retransmissions. Contrarily, DQ does not require to know the number of nodes in advance because it is able to efficiently construct an ad hoc network schedule for each collection round. This kind of a schedule ensures that there are no packet collisions during data transmission, thus leading to an energy consumption reduction above 10% compared to FSA.
CitationTuset-Peiro, P. [et al.]. Experimental energy consumption of Frame Slotted ALOHA and Distributed Queuing for data collection scenarios. "Sensors", Juliol 2014, vol. 14, núm. 8, p. 13416-13436.
URIhttp://hdl.handle.net/2117/23700
DOI10.3390/s140813416
ISSN1424-8220
Publisher versionhttp://www.mdpi.com/1424-8220/14/8/13416
Collections
Share: