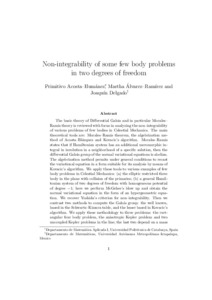 Show full item record
Acosta Humánez, Primitivo Belén
Álvarez Ramírez, Martha
Delgado Fernández, Joaquín
Document typeArticle
Rights accessOpen Access
Abstract
The basic theory of Differential Galois and in particular Morales--Ramis theory is reviewed with focus in analyzing the non--integrability of various problems of few bodies in Celestial Mechanics. The main theoretical tools are: Morales--Ramis theorem, the algebrization me\-thod of Acosta--Bl\'azquez and Kovacic's algorithm. Morales--Ramis states that if Hamiltonian system has an additional meromorphic integral in involution in a neighborhood of a specific solution, then the differential Galois group of the normal variational equations is abelian. The algebrization method permits under general conditions to recast the variational equation in a form suitable for its analysis by means of Kovacic's algorithm. We apply these tools to various examples of few body problems in Celestial Mechanics: (a) the elliptic restricted three body in the plane with collision of the primaries; (b) a general Hamiltonian system of two degrees of freedom with homogeneous potential of degree $-1$; here we perform McGehee's blow up and obtain the normal variational equation in the form of an hypergeometric equation. We recover Yoshida's criterion for non--integrability. Then we contrast two methods to compute the Galois group: the well known, based in the Schwartz--Kimura table, and the lesser based in Kovacic's algorithm. We apply these methodology to three problems: the rectangular four body problem, the anisotropic Kepler problem and two uncoupled Kepler problems in the line; the last two depend on a mass parameter, but while in the anisotropic problem it is integrable for only two values of the parameter, the two uncoupled Kepler problems is completely integrable for all values of the masses.
URIhttp://hdl.handle.net/2117/2370
Collections
Share: