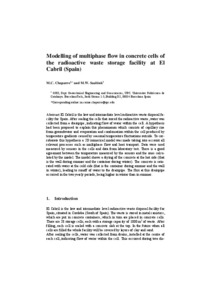 Document typeConference report
Rights accessOpen Access
All rights reserved. This work is protected by the corresponding intellectual and industrial property rights. Without prejudice to any existing legal exemptions, reproduction, distribution, public communication or transformation of this work are prohibited without permission of the copyright holder
Abstract
El Cabril is the low and intermediate level radioactive waste disposal facility for Spain. After sealing the cells that stored the radioactive waste, water was collected from a drainpipe, indicating flow of water within the cell. A hypothesis had been proposed to explain this phenomenon which consists of capillary rise from groundwater and evaporation and condensation within the cell produced by temperature gradients caused by seasonal temperature fluctuations outside. To corroborate this hypothesis a 2D numerical model was made taking into account all relevant processes such as multiphase flow and heat transport. Data were used measured by sensors in the cells and data from laboratory test. There is a good agreement between the temperature measured by the sensors and the ones calculated by the model. The model shows a drying of the concrete at the hot side (that is the wall during summer and the container during winter). The concrete is saturated with water at the cold side (that is the container during summer and the wall in winter), leading to runoff of water to the drainpipe. The flux at this drainpipe occurred in the two yearly periods, being higher in winter than in summer.
CitationChaparro, M.C.; Saaltink, M. Modelling of multiphase flow in concrete cells of the radioactive waste storage facility at El Cabril (Spain). A: International Symposium on Cement-based Materials for Nuclear Wastes. "NUWCEM 2014 : 2nd International Symposium on Cement-based Materials for Nuclear Waste : June 3-5, Palais des Papes, Avignon, June 6 CEA Marcoule". Avignon: 2014, p. 1-8.
URIhttp://hdl.handle.net/2117/23683
Collections
Share: