Impacts on effluent contaminants from mine sites : risk assessment, fate, and distribution of pollution at basin scale 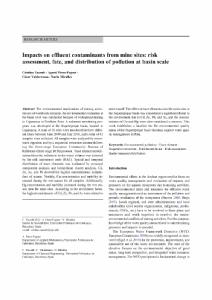 The environmental implications of mining activities are of worldwide concern. An environmental evaluation at the basin level was conducted because of widespread mining in Cajamarca in Northern Peru. A sediment monitoring program was developed at the Jequetepeque basin, located in Cajamarca. A total of 16 sites were monitored at three different times between June 2009 and July 2010, and a total of 42 samples were collected. All samples were analyzed by microwave digestion and by a sequential extraction scheme following the three-stage European Community Bureau of Reference (three-stage BCR) protocol. Trace element mobilization from the sediments to the water column was assessed by the risk assessment code (RAC). Spatial and temporal distribution of trace elements was evaluated by principal component analysis and hierarchical cluster analysis. Cd, Zn, As, and Pb showed the highest concentrations independent of season. Notably, Cu concentration and mobility increased during the wet season for all samples. Additionally, Hg concentration and mobility increased during the wet season near the mine sites. According to the enrichment factor, the highest enrichments of Cd, Zn, Pb, and As were related to mine runoff. The effect of trace elements near the mine sites at the Jequetepeque basin was considered a significant threat to the environment due to Cd, Zn, Pb, and As, and the concentrations of Cu and Hg were also considered a concern. This work establishes a baseline for the environmental quality status of the Jequetepeque basin that may support water quality management in Peru.