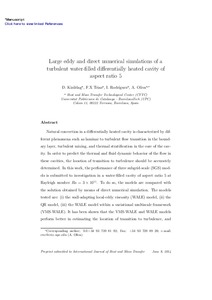 Document typeArticle
Rights accessOpen Access
All rights reserved. This work is protected by the corresponding intellectual and industrial property rights. Without prejudice to any existing legal exemptions, reproduction, distribution, public communication or transformation of this work are prohibited without permission of the copyright holder
Abstract
Natural convection in a differentially heated cavity is characterized by different phenomena such as laminar to turbulent flow transition in the boundary layer, turbulent mixing, and thermal stratification in the core of the cavity. In order to predict the thermal and fluid dynamic behavior of the flow in these cavities, the location of transition to turbulence should be accurately determined. In this work, the performance of three subgrid-scale (SGS) models is submitted to investigation in a water-filled cavity of aspect ratio 5 at Rayleigh number Ra=3e11. To do so, the models are compared with the solution obtained by means of direct numerical simulation. The models tested are: (i) the wall-adapting local-eddy viscosity (WALE) model, (ii) the QR model, (iii) the WALE model within a variational multiscale framework (VMS-WALE). It has been shown that the VMS-WALE and WALE models perform better in estimating the location of transition to turbulence, and thus their overall behavior is more accurate than the QR model. The results have also revealed that the use of SGS models is justified in this flow as the transition location and consequently the flow structure cannot be captured properly if no model is used for the tested spatial resolution.
CitationKizildag, D. [et al.]. Large eddy and direct numerical simulations of a turbulent water-filled differentially heated cavity of aspect ratio 5. "International journal of heat and mass transfer", 01 Octubre 2014, vol. 77, p. 1084-1094.
URIhttp://hdl.handle.net/2117/23641
DOI10.1016/j.ijheatmasstransfer.2014.06.030
ISSN0017-9310
Collections
Share: