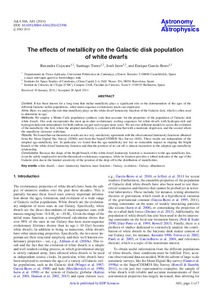 Document typeArticle
Rights accessOpen Access
Abstract
Context. It has been known for a long time that stellar metallicity plays a significant role in the determination of the ages of the different Galactic stellar populations, when main sequence evolutionary tracks are employed. Aims. Here, we analyze the role that metallicity plays on the white dwarf luminosity function of the Galactic disk, which is often used to determine its age. Methods. We employ a Monte Carlo population synthesis code that accounts for the properties of the population of Galactic disk white dwarfs. Our code incorporates the most up-to-date evolutionary cooling sequences for white dwarfs with hydrogen-rich and hydrogen-deficient atmospheres for both carbon-oxygen and oxygen-neon cores. We use two different models to assess the evolution of the metallicity: the first, where the adopted metallicity is constant with time but with a moderate dispersion, and the second where the metallicity increases with time. Results. We found that our theoretical results are in a very satisfactory agreement with the observational luminosity functions obtained from the Sloan Digital Sky Survey (SDSS) and from the SuperCOSMOS Sky Survey (SSS). These results are independent of the adopted age-metallicity law. In particular, we found that the age-metallicity law has no noticeable impact in shaping the bright branch of the white dwarf luminosity function and that the position of its cut-off is almost insensitive to the adopted age-metallicity relationship. Conclusions. Because the shape of the bright branch of the white dwarf luminosity function is insensitive to the age-metallicity law, it can be safely employed to test the theoretical evolutionary sequences, while its location provides a robust indicator of the age of the Galactic disk due to the limited sensitivity of the position of the drop-off to the distribution of metallicities
CitationCojocaru, E. [et al.]. The effects of metallicity on the Galactic disk population of white dwarfs. "Astronomy and astrophysics", Juny 2014, vol. 566, núm. id.A81.
URIhttp://hdl.handle.net/2117/23585
DOI10.1051/0004-6361/201423396
ISSN0004-6361
Collections
Share: