Survey on assembly sequencing: a combinatorial and geometrical perspective 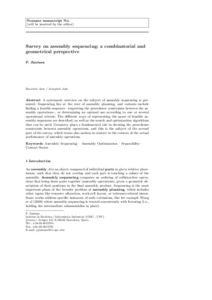 Document typeArticle
Rights accessOpen Access
European Commission's projectINTELLACT - Intelligent observation and execution of Actions and manipulations (EC-FP7-269959)
Abstract
A systematic overview on the subject of assembly sequencing is presented. Sequencing lies at the core of assembly planning, and variants include finding a feasible sequence—respecting the precedence constraints between the assembly operations—, or determining an optimal one according to one or several operational criteria. The different ways of representing the space of feasible assembly sequences are described, as well as the search and optimization algorithms that can be used. Geometry plays a fundamental role in devising the precedence constraints between assembly operations, and this is the subject of the second part of the survey, which treats also motion in contact in the context of the actual performance of assembly operations.
CitationJimenez, P. Survey on assembly sequencing: a combinatorial and geometrical perspective. "Journal of intelligent manufacturing", 2013, vol. 24, núm. 2, p. 235-250.
URIhttp://hdl.handle.net/2117/23575
DOI10.1007/s10845-011-0578-5
ISSN0956-5515
Publisher versionhttp://dx.doi.org/10.1007/s10845-011-0578-5
Collections
Share: