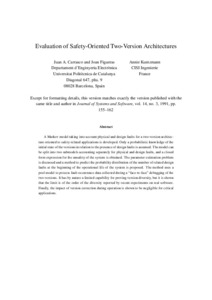 Kuntzman, A
Document typeArticle
Rights accessOpen Access
Abstract
A Markov model taking into account physical and design faults for a two-version architecture oriented to safety-related applications is developed. Only a probabilistic knowledge of the initial state of the versions in relation to the presence of design faults is assumed. The model can be split into two submodels accounting separately for physical and design faults, and a closed form expression for the unsafety of the system is obtained. The parameter estimation problem is discussed and a method to predict the probability distribution of the number of related design faults at the beginning of the operational life of the system is proposed. The method uses a pool model to process fault-occurrence data collected during a “face-to-face” debugging of the two versions. It has by nature a limited capability for proving version diversity, but it is shown that the limit is of the order of the diversity reported by recent experiments on real software. Finally, the impact of version correction during operation is shown to be negligible for critical applications.
CitationCarrasco, J.; Figueras, J.; Kuntzman, A. Evaluation of safety-oriented two-version architectures. "Journal of systems and software", Març 1991, vol. 14, núm. 3, p. 155-162.
URIhttp://hdl.handle.net/2117/23547
ISSN0164-1212
Collections
Share: