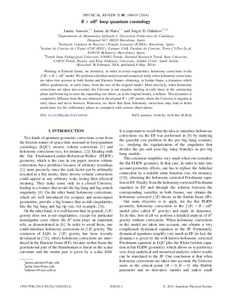 Except where otherwise noted, content on this work is licensed under a Creative Commons license : Attribution-NonCommercial-NoDerivs 3.0 Spain
Abstract
Working in Einstein frame, we introduce, in order to avoid singularities, holonomy corrections to the f(R)=R+aR2 model. We perform a detailed analytical and numerical study when holonomy corrections are taken into account in both Jordan and Einstein frames, obtaining, in Jordan frame, a dynamics which differs qualitatively, at early times, from the one of the original model. More precisely, when holonomy corrections are taken into account, the Universe is not singular, starting at early times in the contracting phase and bouncing to enter the expanding one where, as in the original model, it inflates. This dynamics is completely different from the one obtained in the original R+aR2 model, where the Universe is singular at early times and never bounces. Moreover, we show that these holonomy corrections may lead to better predictions for the inflationary phase as compared with current observations.
CitationAmoros, J.; De Haro, J.; Odintsov, S. R+aR2 loop quantum cosmology. "Physical Review D - Particles, Fields, Gravitation and Cosmology", 06 Maig 2014, vol. 89, núm. 10, p. 1-12.
URIhttp://hdl.handle.net/2117/23514
DOI10.1103/PhysRevD.89.104010
ISSN1550-2368
Publisher versionhttp://journals.aps.org/prd/abstract/10.1103/PhysRevD.89.104010
Collections
Share: