In and out of the minor groove: Interaction of an AT-rich DNA with the drug CD27 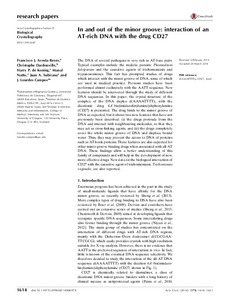 Document typeArticle
Rights accessOpen Access
Abstract
The DNA of several pathogens is very rich in AT base pairs. Typical examples include the malaria parasite Plasmodium falciparum and the causative agents of trichomoniasis and trypanosomiases. This fact has prompted studies of drugs which interact with the minor groove of DNA, some of which are used in medical practice. Previous studies have been performed almost exclusively with the AATT sequence. New features should be uncovered through the study of different DNA sequences. In this paper, the crystal structure of the complex of the DNA duplex d(AAAATTTT)2 with the dicationic drug 4,4'-bis(imidazolinylamino) diphenylamine (CD27) is presented. The drug binds to the minor groove of DNA as expected, but it shows two new features that have not previously been described: (i) the drugs protrude from the DNA and interact with neighbouring molecules, so that they may act as cross-linking agents, and (ii) the drugs completely cover the whole minor groove of DNA and displace bound water. Thus, they may prevent the access to DNA of proteins such as AT-hook proteins. These features are also expected for other minor-groove binding drugs when associated with all-AT DNA. These findings allow a better understanding of this family of compounds and will help in the development of new, more effective drugs. New data on the biological interaction of CD27 with the causative agent of trichomoniasis, Trichomonas vaginalis, are also reported.
CitationAcosta, F.J. [et al.]. In and out of the minor groove: Interaction of an AT-rich DNA with the drug CD27. "Acta Crystallographica Section D: Biological Crystallography", Juny 2014, vol. 70, núm. 6, p. 1614-1621.
URIhttp://hdl.handle.net/2117/23505
DOI10.1107/S139900471400697X
ISSN1399-0047
Publisher versionhttp://scripts.iucr.org/cgi-bin/paper?S139900471400697X
Collections
Share: