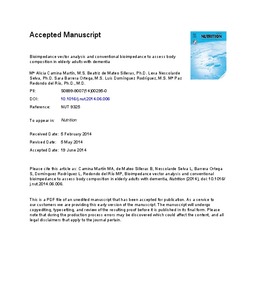 Barrera, Sara
Domínguez, Luis
Redondo, Mª Paz
Document typeArticle
Rights accessOpen Access
Abstract
Rationale Although dementia and nutritional status have been shown to be strongly associated, differences in body composition (BC) among elderly with dementia have not yet to be firmly established. Objective To assess the BC through conventional and vector bioimpedance analysis (BIA and BIVA, respectively) in a sample of institutionalized elderly men with and without dementia, in order to detect dementia-related BC changes. Methods Forty-one institutionalized men aged 65 years or older (23 without dementia- CG- and 18 with dementia-DG-) were measured with BIA and interpreted with BIVA and predictive equations. Results Age (74.4 and 75.7 y) and BMI (22.5 and 23.6 kg/m2) were similar for DG and CG, respectively. Resistance and resistance/height ratio did not differ significantly between groups Reactance and reactance/height ratio were 21.2 and 20.4% lower in DG than in CG. Phase angle was significantly lower in DG (mean: 4.0; 95% CI: 3.6-4.3 degrees) than in CG (mean: 4.7; 95% CI: 4.3-5.1 degrees). Mean fat mass index (6.0 and 7.0 kg/m2), and mean fat-free mass index (16.4 and 16.6 kg/m2) were similar in DG and CG. BIVA showed a significant downward migration of the ellipse in DG with respect to CG (T2=15.1, p<0.01). Conclusion Conventional BIA showed no significant differences in BC between DG and CG, even though reactance and reactance/height were about 21% lower in DG. Nevertheless, a body cell mass depletion and an increase in the extracellular/intracellular water-ratio were identified in DG using BIVA. BIVA reflects dementia-related changes in BC better than BIA.
CitationCamina, A. [et al.]. Bioimpedance vector analysis and conventional bioimpedance to assess body composition in elderly adults with dementia. "Nutrition", 05 Juliol 2014.
URIhttp://hdl.handle.net/2117/23502
DOI10.1016/j.nut.2014.06.006
ISSN0899-9007
Collections
Share: