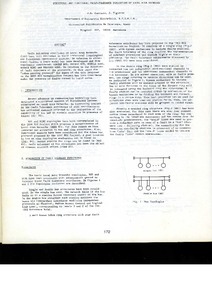 Fault tolerance attributes of Local Area Networks (LAN) have been evaluated in their structural (topologies) and functional (protocols) aspects. In relation to structural faults, a fault model has been developed and five topologies considered: SINGLE BUS, DOUBLE BUS, SINGLE RING, DOUBLE RING and BRAIDE RING. In relation to the functional fault tolerance of the protocols, in this paper the "token passing protocol" for buses of the type proposed in the IEEE 802 Normalization Project has been considered under the presence of faults caused by burst noise.
CitationCarrasco, J.; Figueras, J. Structural and functional fault-tolerance evaluation of local area networks. A: International Symposium Mini and Microcomputers and their Applications. "Actes del International Symposium Mini and Microcomputers and their Applications: Sant Feliu de Guixols, 25-28 de juny, 1985". 1985, p. 172-175.
URIhttp://hdl.handle.net/2117/23489