Proactive behavior of an autonomous mobile robot for human-assisted learning 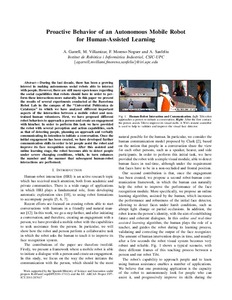 During the last decade, there has been a growing interest in making autonomous social robots able to interact with people. However, there are still many open issues regarding the social capabilities that robots should have in order to perform these interactions more naturally. In this paper we present the results of several experiments conducted at the Barcelona Robot Lab in the campus of the “Universitat Politècnica de Catalunya” in which we have analyzed different important aspects of the interaction between a mobile robot and non-trained human volunteers. First, we have proposed different robot behaviors to approach a person and create an engagement with him/her. In order to perform this task we have provided the robot with several perception and action capabilities, such as that of detecting people, planning an approach and verbally communicating its intention to initiate a conversation. Once the initial engagement has been created, we have developed further communication skills in order to let people assist the robot and improve its face recognition system. After this assisted and online learning stage, the robot becomes able to detect people under severe changing conditions, which, in turn enhances the number and the manner that subsequent human-robot interactions are performed.
CitationGarrell, A. [et al.]. Proactive behavior of an autonomous mobile robot for human-assisted learning. A: IEEE International Symposium on Robot and Human Interactive Communication. "Proceedings of the 22nd IEEE International Symposium on Robot and Human Communication (RO-MAN 2013)". Gyeongju: 2013, p. 107-113.
URIhttp://hdl.handle.net/2117/23458
DOI10.1109/ROMAN.2013.6628463
Publisher versionhttp://dx.doi.org/10.1109/ROMAN.2013.6628463