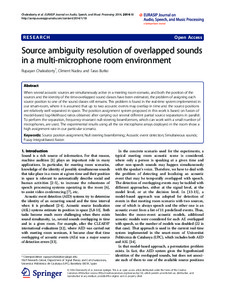 Butko, Taras
Document typeArticle
Rights accessOpen Access
Abstract
When several acoustic sources are simultaneously active in a meeting room scenario, and both the position of the sources and the identity of the time-overlapped sound classes have been estimated, the problem of assigning each source position to one of the sound classes still remains. This problem is found in the real-time system implemented in our smart-room, where it is assumed that up to two acoustic events may overlap in time and the source positions are relatively well separated in space. The position assignment system proposed in this work is based on fusion of model-based log-likelihood ratios obtained after carrying out several different partial source separations in parallel. To perform the separation, frequency-invariant null-steering beamformers, which can work with a small number of microphones, are used. The experimental results using all the six microphone arrays deployed in the room show a high assignment rate in our particular scenario.
CitationChakraborty , R.; Nadeu, C.; Butko, T. Source ambiguity resolution of overlapped sounds in a multi-microphone room environment. "Eurasip journal on audio, speech, and music processing", Abril 2014, vol. 2014, núm. 18, p. 1-8.
URIhttp://hdl.handle.net/2117/23384
DOI10.1186/1687-4722-2014-18
ISSN1687-4714
Publisher versionhttp://asmp.eurasipjournals.com/content/2014/1/18
Collections
Share: