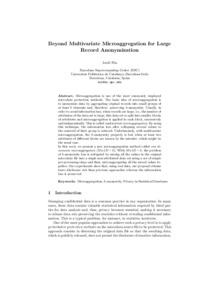 Document typeArticle
Rights accessOpen Access
Abstract
Microaggregation is one of the most commonly employed microdata protection methods. The basic idea of microaggregation is to anonymize data by aggregating original records into small groups of at least k elements and, therefore, preserving k -anonymity. Usually, in order to avoid information loss, when records are large, i.e., the number of attributes of the data set is large, this data set is split into smaller blocks of attributes and microaggregation is applied to each block, successively and independently. This is called multivariate microaggregation. By using this technique, the information loss after collapsing several values to the centroid of their group is reduced. Unfortunately, with multivariate microaggregation, the k -anonymity property is lost when at least two attributes of different blocks are known by the intruder, which might be the usual case. In this work, we present a new microaggregation method called one dimension microaggregation ( Mic1D-k ). With Mic1D-k , the problem of k -anonymity loss is mitigated by mixing all the values in the original microdata file into a single non-attributed data set using a set of simple pre-processing steps and then, microaggregating all the mixed values together. Our experiments show that, using real data, our proposal obtains lower disclosure risk than previous approaches whereas the information loss is preserved.
CitationNin, J. Beyond multivariate microaggregation for large record anonymization. "Lecture notes in computer science", 2014, vol. 8313, p. 87-107.
URIhttp://hdl.handle.net/2117/23297
DOI10.1007/978-3-319-04178-0_8
ISSN0302-9743
Publisher versionhttp://link.springer.com/chapter/10.1007%2F978-3-319-04178-0_8
Collections
Share: