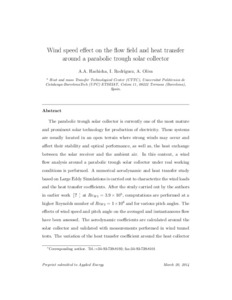 Document typeArticle
Rights accessOpen Access
Abstract
Parabolic trough solar collectors are currently one of the most mature and prominent solar technology for the production of electricity. These systems are usually located in an open terrain where strong winds may be found, and could affect their stability and optical performance, as well as the heat exchange between the solar receiver and the ambient air. In this context, a wind flow analysis around a parabolic trough solar collector under real working conditions is performed. A numerical aerodynamic and heat transfer study based on Large Eddy Simulations is carried out to characterise the wind loads and heat transfer coefficients. After the study carried out by the authors in an earlier work (Hachicha et al. 2013) at ReW1=3.9e5, computations are performed at a higher Reynolds number of ReW2=1e6, and for various pitch angles. The effects of wind speed and pitch angle on the averaged and instantaneous flow are assessed. The aerodynamic coefficients are calculated around the solar collector and validated with measurements performed in wind tunnel tests. The variation of the heat transfer coefficient around the heat collector element with the Reynolds number is presented and compared to the circular cylinder in cross-flow. The unsteady flow is studied for three pitch angles: 0 ; 45 and 90 and different structures and recirculation regions are identified. A spectral analysis around the parabola and its receiver is also carried out in order to detect the most relevant frequencies related to the vortex shedding mechanism which affects the stability of the collector.
CitationAmine Hachicha, A.; Rodriguez, I.; Oliva, A. Wind speed effect on the flow field and heat transfer around a parabolic trough solar collector. "Applied energy", 01 Octubre 2014, vol. 130, p. 200-211.
URIhttp://hdl.handle.net/2117/23266
DOI10.1016/j.apenergy.2014.05.037
ISSN0306-2619
Publisher versionhttp://dx.doi.org/10.1016/j.apenergy.2014.05.037
Collections
Share: