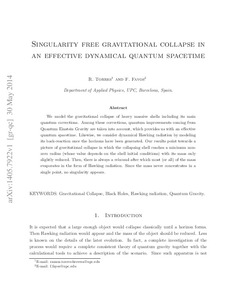 Document typeArticle
PublisherElsevier
Rights accessOpen Access
Abstract
We model the gravitational collapse of heavy massive shells including its main quantum corrections. Among these corrections, quantum improvements coming from Quantum Einstein Gravity are taken into account, which provides us with an effective quantum spacetime. Likewise, we consider dynamical Hawking radiation by modeling its back-reaction once the horizons have been generated. Our results point towards a picture of gravitational collapse in which the collapsing shell reaches a minimum non-zero radius (whose value depends on the shell initial conditions) with its mass only slightly reduced. Then, there is always a rebound after which most (or all) of the mass evaporates in the form of Hawking radiation. Since the mass never concentrates in a single point, no singularity appears.
CitationTorres, R.; Fayos, F. Singularity free gravitational collapse in an effective dynamical quantum spacetime. "Physics letters B", 05 Maig 2014, vol. 733, p. 169-175.
URIhttp://hdl.handle.net/2117/23149
DOI10.1016/j.physletb.2014.04.038
ISSN0370-2693
Publisher versionhttp://www.sciencedirect.com/science/article/pii/S0370269314002780#
Collections
Share: