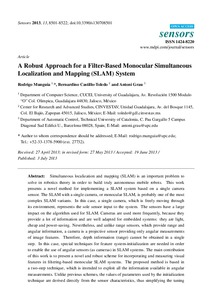 Document typeArticle
Rights accessOpen Access
Abstract
Simultaneous Localization and Mapping (SLAM) is an important problem to solve in robotics theory in order to build truly autonomous mobile robots. This work presents a novel method for implementing a SLAM system based on a single camera sensor. The SLAM with a single camera, or monocular SLAM, is probably one of the most complex SLAM variants. In this case a single camera, which is freely moving through its environment, represents the sole sensor input to the system. The sensors have a large impact on the algorithm used for SLAM. Cameras are used more frequently, because they provide a lot of information and are well adapted for embedded systems: they are light, cheap and power saving. Nevertheless, and unlike range sensors which provide range and angular information, a camera is a projective sensor providing only angular measurements of images features. Therefore depth information (range) cannot be obtained in a single step. In this case especial techniques for feature system-initialization are needed in order to enable the use of angular sensors (as cameras) in SLAM systems. The main contribution of this work is to present a novel and robust scheme for incorporating and measuring visual features in filtering-based monocular SLAM systems. he proposed method is based in a two-step technique, which is intended to exploit all the information available in angular measurements. Unlike previous schemes, the values of parameters used by the initialization technique are derived directly from the sensor characteristics, thus simplifying the tuning of the system. The experimental results show that the proposed method surpasses the performance of previous schemes.
CitationMunguía, R.F.; Castillo-Toledo, B.; Grau, A. A robust approach for a filter-based monocular simultaneous localization and mapping (SLAM) system. "Sensors", 03 Juliol 2013, vol. 13, núm. 7, p. 8501-8522.
URIhttp://hdl.handle.net/2117/23131
DOI10.3390/s130708501
ISSN1424-8220
Publisher versionhttp://www.mdpi.com/1424-8220/13/7/8501
Collections
Share: