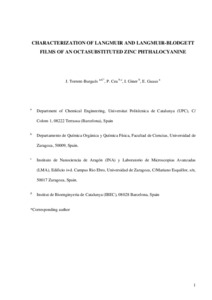 Except where otherwise noted, content on this work is licensed under a Creative Commons license : Attribution-NonCommercial-NoDerivs 3.0 Spain
Abstract
In this work we report the fabrication of Langmuir and Langmuir-Blodgett (LB) films of a substituted ZnPc (octakis(oxyoctyl) phthalocyanine of zinc), and their characterization by means of several techniques. These characterization techniques include surface pressure (pi-A) and surface potential (Delta V-A) isotherms as well as UV-vis Reflection spectroscopy and Brewster Angle Microscopy (BAM) for the films at the air-water interface together with UV-vis absorption and IR spectroscopies and Atomic Force Microscopy (AFM) for the LB films. The pi-A and Delta V-A isotherms and BAM images indicate a phase transition at a surface pressure of ca. 9mN/m and a multilayer formation at surface pressures around 19-20 mN/ m; at a surface pressure around 27 mN/ m a disordered collapse of the film occurs. In addition, AFM images of LB films at p= 10mN/ mand p= 20 mN/ m show a monomolecular and a multilayered film, respectively. The comparison of the UV-vis spectrum of ZnPc in solution, the reflection spectra of the Langmuir films and UV-vis spectra of LB films reveals a significant reduction in the Q band intensity for the films, indicative of an organization of ZnPc in the Langmuir and LB films versus the randomdistribution in solution. The UV-vis Reflection spectra are also consistentwith multilayer formation at surface pressures around 19-20 mN/ m. The relative intensities of the IR spectrum bands change from the KBr pellet to the LB filmwhich is also attributable to orientation effects in the film. Cyclic voltammetric experiments of LB films incorporating the ZnPc derivative show peaks that can be correlated with redox processes occurring in the phthalocyanine ring. A small but significant influence of the surface pressure and the number of deposited layers in the electrochemical behaviour is observed. The electrochemical response of cast films exhibits some differences with respect to that of LB films which have been attributed to their different molecular organizations. (C) 2014 Elsevier B. V. All rights reserved.
CitationTorrent, J. [et al.]. Characterization of Langmuir and Langmuir-Blodgett films of an octasubstituted zinc phthalocyanine. "Thin solid films", 01 Abril 2014, vol. 556, p. 485-494.
URIhttp://hdl.handle.net/2117/23103
DOI10.1016/j.tsf.2014.01.045
ISSN0040-6090
Collections
Share: