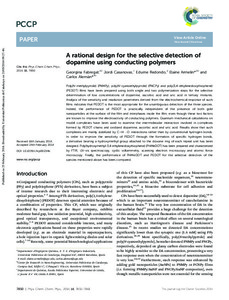 Document typeArticle
Rights accessOpen Access
Abstract
Poly(N-methylpyrrole) (PNMPy), poly(N-cyanoethylpyrrole) (PNCPy) and poly(3,4-ethylenedioxythiophene) (PEDOT) films have been prepared using both single and two polymerization steps for the selective determination of low concentrations of dopamine, ascorbic acid and uric acid in tertiary mixtures. Analysis of the sensitivity and resolution parameters derived from the electrochemical response of such films indicates that PEDOT is the most appropriate for the unambiguous detection of the three species. Indeed, the performance of PEDOT is practically independent of the presence of both gold nanoparticles at the surface of the film and interphases inside the film, even though these two factors are known to improve the electroactivity of conducting polymers. Quantum mechanical calculations on model complexes have been used to examine the intermolecular interaction involved in complexes formed by PEDOT chains and oxidized dopamine, ascorbic acid and uric acid. Results show that such complexes are mainly stabilized by C-H¿O interactions rather than by conventional hydrogen bonds. In order to improve the sensitivity of PEDOT through the formation of specific hydrogen bonds, a derivative bearing a hydroxymethyl group attached to the dioxane ring of each repeat unit has been designed. Poly(hydroxymethyl-3,4-ethylenedioxythiophene) (PHMeDOT) has been prepared and characterized by FTIR, UV-vis spectroscopy, cyclic voltammetry, scanning electron microscopy and atomic force microscopy. Finally, the performance of PHMeDOT and PEDOT for the selective detection of the species mentioned above has been compared. © 2014 the Partner Organisations.
CitationFabregat, G. [et al.]. A rational design for the selective detection of dopamine using conducting polymers. "Physical chemistry chemical physics", 25 Febrer 2014, vol. 16, núm. 17, p. 7850-7861.
URIhttp://hdl.handle.net/2117/23025
DOI10.1039/c4cp00234b
ISSN1463-9076
Publisher versionhttp://pubs.rsc.org/en/Content/ArticleLanding/2014/CP/c4cp00234b
Collections
Share: