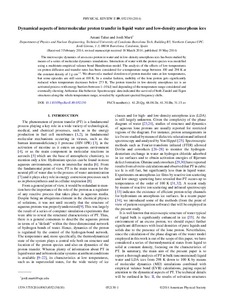 Document typeArticle
Rights accessOpen Access
Abstract
The microscopic dynamics of an excess proton in water and in low-density amorphous ices has been studied by means of a series of molecular dynamics simulations. Interaction of water with the proton species was modelled using a multistate empirical valence bond Hamiltonian model. The analysis of the effects of low temperatures on proton diffusion and transfer rates has been considered for a temperature range between 100 and 298 K at the constant density of 1 g cm -3 . We observed a marked slowdown of proton transfer rates at low temperatures, but some episodes are still seen at 100 K. In a similar fashion, mobility of the lone proton gets significantly reduced when temperature decreases below 273 K. The proton transfer in low-density amorphous ice is an activated process with energy barriers between 1–10 kJ/mol depending of the temperature range considered and eventually showing Arrhenius-like behavior. Spectroscopic data indicated the survival of both Zundel and Eigen structures along the whole temperature range, revealed by significant spectral frequency shifts.
CitationTahat, A.; Marti, J. Dynamical aspects of intermolecular proton transfer in liquid water and low-density amorphous ices. "Physical review E: statistical, nonlinear, and soft matter physics", 19 Maig 2014, vol. 89, núm. 5, p. 052130-1-052130-10.
URIhttp://hdl.handle.net/2117/23020
DOI10.1103/PhysRevE.89.052130
ISSN1539-3755
Publisher versionhttp://dx.doi.org/10.1103/PhysRevE.89.052130
Collections
Share: