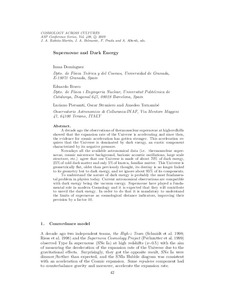 A decade ago the observations of thermonuclear supernovae at high-redhifts showed that the expansion rate of the Universe is accelerating and since then, the evidence for cosmic acceleration has gotten stronger. This acceleration requires that the Universe is dominated by dark energy, an exotic component characterized by its negative pressure. Nowadays all the available astronomical data (i.e. thermonuclear supernovae, cosmic microwave background, barionic acoustic oscillations, large scale structure, etc.) agree that our Universe is made of about 70% of dark energy, 25% of cold dark matter and only 5% of known, familiar matter. This Universe is geometrically flat, older than previously thought, its destiny is no longer linked to its geometry but to dark energy, and we ignore about 95% of its components. To understand the nature of dark energy is probably the most fundamental problem in physics today. Current astronomical observations are compatible with dark energy being the vacuum energy. Supernovae have played a fundamental role in modern Cosmology and it is expected that they will contribute to unveil the dark energy. In order to do that it is mandatory to understand the limits of supernovae as cosmological distance indicators, improving their precision by a factor 10.
CitationDomínguez, I. [et al.]. Supernovae and dark energy. A: Cosmology Across Cultures. "Cosmology Across Cultures". Granada: Astronomical Society of the Pacific, 2008, p. 42-46.
URIhttp://hdl.handle.net/2117/22952
ISBN978-1-58381-698-1
Publisher versionhttp://cdsads.u-strasbg.fr/abs/2009ASPC..409...42D