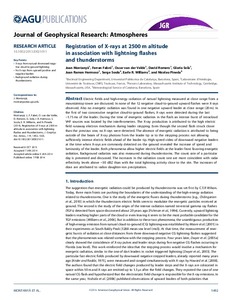 Document typeArticle
Rights accessOpen Access
Abstract
Electric fields and high-energy radiation of natural lightning measured at close range from a mountaintop tower are discussed. In none of the 12 negative cloud-to-ground upward flashes were X-rays observed. Also no energetic radiation was found in one negative upward leader at close range (20¿m). In the first of two consecutive negative cloud-to-ground flashes, X-rays were detected during the last ~1.75¿ms of the leader. During the time of energetic radiation in the flash an intense burst of intracloud VHF sources was located by the interferometers. The X-ray production is attributed to the high electric field runaway electron mechanism during leader stepping. Even though the second flash struck closer than the previous one, no X-rays were detected. The absence of energetic radiation is attributed to being outside of the beam of X-ray photons from the leader tip or to the stepping process not allowing sufficiently intense electric fields ahead of the leader tip. High-speed video of downward negative leaders at the time when X-rays are commonly detected on the ground revealed the increase of speed and luminosity of the leader. Both phenomena allow higher electric fields at the leader front favoring energetic radiation. Background radiation was also measured during thunderstorms. The count rate of a particular day is presented and discussed. The increases in the radiation count rate are more coincident with radar reflectivity levels above ~30 dBZ than with the total lightning activity close to the site. The increases of dose are attributed to radon daughter-ion precipitation
CitationMontaña, J. [et al.]. Registration of X-rays at 2500 m altitude in association with lightning flashes and thunderstorms. "Journal of Geophysical Research: Atmospheres", 2014, vol. 119, núm. 3, p. 1492-1503.
URIhttp://hdl.handle.net/2117/22917
DOI10.1002/2013JD021011
ISSN2169-8996
Collections
Share: