Building sensitivity to climatic fluctuations and user's actions: a challenge for high-tech buildings 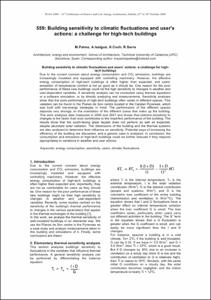 Document typeConference report
PublisherUniversity College Dublin
Rights accessOpen Access
Abstract
Due to the current concern about energy consumption and CO2 emissions, buildings are increasingly insulated and equipped with controlling machinery. However, the effective energy consumption of high-tech buildings is often higher than expected, and users’ sensation of temperature comfort is not as good as it should be. One reason for the poor performance of these new buildings could be the high sensitivity to changes in weather and user-dependent variables. A sensitivity analysis can be conducted using thermal equations or a software simulation, or by directly analyzing real measurements. Sensitivity analyses show that the zone performance of high-tech buildings often varies in different spaces. This variation can be found in the Planes de Son centre located in the Catalan Pyrenees, which was built with low-energy strategies in mind. The performance of the different spaces depends very strongly on the orientation of the different zones that make up the building. This work analyzes data measured in 2006 and 2007 and shows that extreme sensitivity to changes is the factor that most contributes to the imperfect performance of the building. The results show that the south-facing glass façade does not perform as well as expected, despite abundant solar radiation. The dimensions of the building and the thermal Systems are also analyzed to determine their influence on sensitivity. Potential ways of increasing the efficiency of the building are discussed, and a generic case is analyzed. In conclusion, the consumption and emissions of high-tech buildings could be further reduced if they respond appropriately to variations in weather and user actions.
CitationPalme, M. [et al.]. Building sensitivity to climatic fluctuations and user's actions: a challenge for high-tech buildings. A: 25TH PLEA INTERNATIONAL CONFERENCE. "25TH PLEA INTERNATIONAL CONFERENCE". Dublin: University College Dublin, 2008.
URIhttp://hdl.handle.net/2117/22915
ISBN78-1-905254-34-7
Publisher versionhttp://plea-arch.org/ARCHIVE/2008/content/papers_1.html
Collections
Share: