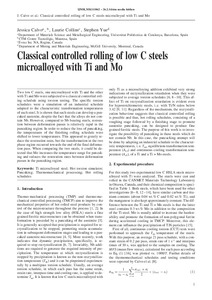 Document typeArticle
Rights accessOpen Access
Abstract
Two low-C steels, one microalloyed with Ti and the other with Ti and Mo were subjected to a classical controlled rolling schedule using torsion testing. The specific torsion schedules were a simulation of an industrial schedule adapted to the characteristic transformation temperatures of each steel. It is shown that such steels can develop a pancaked austenite, despite the fact that the alloys do not contain Nb. However, compared to Nb bearing steels, restoration between deformation passes is relatively rapid in the pancaking region. In order to reduce the loss of pancaking, the temperatures of the finishing rolling schedule were shifted to lower temperatures. This appeared to greatly reduce the restoration rates, but the transformation in the two phase region occurred towards the end of the final deformation pass. When comparing the two steels, it could be detected that Mo increases the temperature range for pancaking and reduces the restoration rates between deformation passes in the pancaking region.
CitationCalvo, J. Classical controlled rolling of low C steels microalloyed with Ti and Mo. "International journal of materials research", 26 Febrer 2014, p. 1-7.
URIhttp://hdl.handle.net/2117/22880
DOI10.3139/146.111062
ISSN1862-5282
Publisher versionhttp://www.hanser-elibrary.com/doi/abs/10.3139/146.111062
Collections
Share: